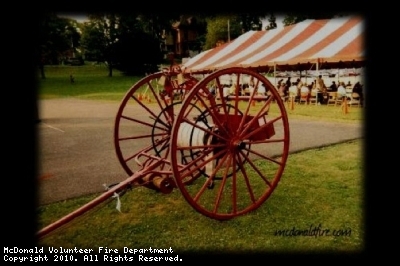 In the late 1700s, after exchanging his horse and saddle with an Indian Chief for the parcel of land which became McDonald, John McDonald opened a trading post, becoming not only one of the first settlers, but the area's first businessman.

McDonald was a political activist, officer of the courts and Indian agent.  He was named to the County Commission for Peace in October 1776.  He set the standards for the town bearing his name; began tradition which have continued through the years.

Nowhere is the continuation of that love and protection of the town more apparent than in the McDonald Volunteer Fire Department.

Where John McDonald had his share of experiences forming the town into an active and safe business community, the volunteer firefighters of McDonald have had their share as well over the past 125 years.

To see a fire hose twist and turn, struggling against the men who hold it, to see ice coat the ladder, truck and gear as flame and smoke roar up into the night, brings but small understanding of what volunteers undertake in their efforts to protect lives and property.

The McDonald Volunteer Fire Department began 125 years ago with 13 volunteers, 500 feet of hose and one men-drawn cart.  The hose was loaded on the cart which firefighters pulled while running; others ran alongside.

Early firefighters had reason to remember and thank John McDonald and other leaders for setting up the town not only with its own water company, but with an underground network of water "pipes."  These were bored out logs through which water ran.  Periodically, holes were bored into the top of the water pipes.  Into each hole a wooden plug was inserted.  When the plug was removed, water gushed up, filling troughs from which the firemen scooped buckets full of water to throw on the flames.  From this very early method, only the term "fireplug" remains in use.

At that time, at least 9 of the 13 were needed to pull the hose cart as they dashed through town, the bell on the hose cart jangling.

From the early years of copper riveted leather hose which replaced the bucket by bucket relay, the years of heavy linen bags in which removable property was placed to be protected and removed, to the present sophisticated equipment, the goal and purpose of the McDonald Volunteer Fire Department has never wavered.

The 1889 incorporation of McDonald into a Borough of the Commonwealth was followed by the election of Borough officers in 1890.  McDonald Volunteer Fire Department was then in its seventh year of service, although the incorporation of the department itself did not begin to take place until the 1930s.

Through the law officers of Bloom & Bloom in Washington, PA, during the summer of 1931, the department filed in the Court of Common Pleas, the incorporation papers for the McDonald Volunteer Fire Department Firemen's Relief Association, in perpetuity, "for the purpose of providing and affording relief to any of its members who may be injured or disabled while engaging in the performance of their duties, or to the wives and orphans or dependent parents of any of its members who may lose their lives in the performance of their duties."

Incorporation on a non-stock basis, of the department itself, took place November 1936, so that the department could "Maintain, conduct and support itself for the purpose of 'Prevention, control and extinguishment of fires' in the borough and nearby townships and boroughs, and for 'the protection of life and property from loss by fire.'"

During the McDonald Volunteer Fire Department Centennial, the founding company of men as well as those in present line-up, and including those who served over the intervening years, were recognized for the devotion to duty.  We have 125 years of hours spent safeguarding lives and property.

This site has been viewed 467,451 times.
News
Events
Pictures
Apparatus
Maintained by the members and staff of McDonald Volunteer Fire Department. Designated trademarks and brands are the property of their respective owners. Copyright © 2006-2022. YourFirstDue Inc. All Rights Reserved. Content on this web site is supplied by McDonald Volunteer Fire Department. YourFirstDue Inc. cannot be held responsible or liable for any content, text, pictures, or any other media found on this web site.
Management login
Powered by